One of the best things about Culinary school was learning the history of food. Many of our favorite foods derived from French cuisine. I mean seriously, the amounts of butter and cream incorporated into traditional French recipes are quite impressive. 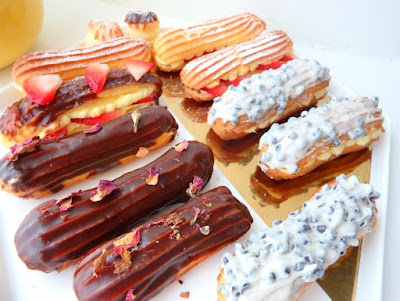 It's no secret that France is the home of romance as well as some of the most amazing pastries in the world. One of them being Pat a Choux. Pat a choux is literally one of the mothers of Old French cuisine. So many of our favorite desserts are derived from this one recipe and it's been around for centuries. One of the most popular being eclairs. Now you can easily find eclairs in supermarkets and they've made a serious comeback! Move over cupcake, the eclair has taken your spot. Scroll through pinterest and instagram and you might see what I mean, hashtag eclair is a thing! Today, eclairs are ranging in flavors from pistachio to root beer. You can find them in every color, any theme and various shapes. They are taking on the trendy train by storm! I was excited for the simple fact that, sometimes I don't want a cake ( I know...there's always room for cake). But now-a-days I want something lighter, proportioned...and fancy. The eclair fit the bill! 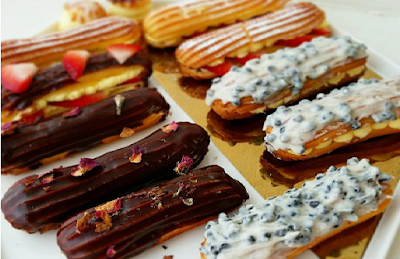 With all of that being said, I'm going to share a traditional pat a choux recipes with you all. From that we are going to make some fancy (and super tasty) eclairs & cream puffs! I'd rather us focus on one slightly difficult recipe at a time, so the pastry cream that I'll be using is a 'mock' pastry cream. It's basically a thick pudding made with...you guessed it, instant pudding mix. You can enhance the flavor by adding some good quality vanilla extract or vanilla bean. Once again, you're only limited to your imaginations here so please - get inspired!

Bring water and butter to a simmer until the butter is completely melted. Remove the pot from the heat and gradually add in flour while stirring.

You want to stir with a spatula (preferably rubber) until a dough is formed and no longer sticks to the sides of the pot.

Allow the dough to cool slightly then transfer to a mixing bowl and gradually add in your eggs. At this point you can use a handheld mixer or standing mixer to add in eggs. We don't want to beat in too much air so once the eggs are completely incorporated, stop mixing. Put the dough in a piping bag with a large round or star tip.

Lay a piece of parchment or rubber mat down on a sheet tray and begin to pipe your eclairs.

A great measurement is between 4 and 5 inches in length. The piping may be slightly tricky at the break away from the piping bag. Pull the piping bag away sharply and simply fix any imperfections by tapping the ends of the eclairs with a wet finger. You can also pipe a few round cream puffs.

Bake in a preheated oven at 425 degrees, for 10 minutes. Then, lower the heat to 350 degrees and cook for another 20 minutes. When finished, the eclair should be light and fluffy, and springy to the touch. The ultimate test is to break one in half, there should be no wetness in the center.

In a large mixing bowl with electric mixer: Add all of the ingredients to the bowl and whip for a couple of minutes until it reaches a thick custard like consistency. The custard will thicken as it sits. Put this in a piping bag with a small round tip.

Naturally the flavor here will be vanilla, but feel to use a different flavored pudding such as pistachio or chocolate.