The Avengers are fighting for the number 1 most requested cake this summer. 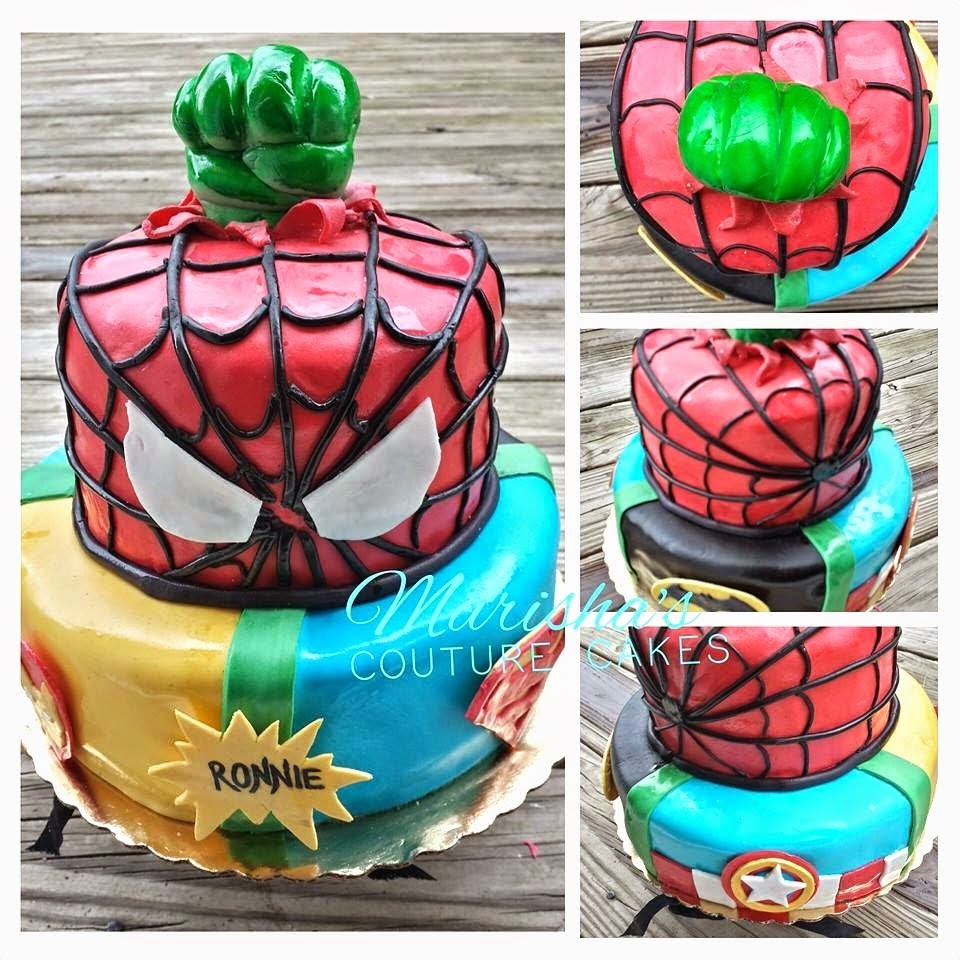 Not with just Marisha's Couture but with a lot of bakers and cake-gicians.
I don't know what happened (maybe I missed the movie), but kids and mommy's across the region are on the hunt for a slamming Avengers cake. One cake with 5 to 7 themes - which is an awesome idea. The Avengers are a series of fictional superhero teams based on the Marvel Comic books that we all know and love. There are dozens of superhero's who have made the team. But, the most popular and main characters who make the cake are: The Hulk, Spiderman, Superman, Captain America, Batman and Ironman.


I totally and completely fell in love with the Avengers cake that I did for a little superhero's birthday party this summer. It was colorful, fun and fit each of the superhero themes in just two tiers. 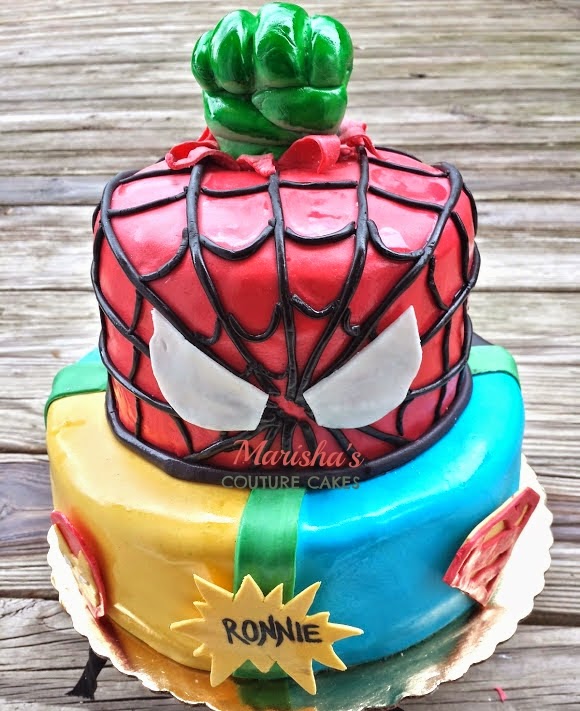 I started off with a 6" red velvet and an 8" chocolate cake. Then, rolled out two shades of blue fondant, yellow fondant and black fondant. To apply the fondant, loosely measure and fit the fondant to the 8" cake in quarters and cover the seams with a strip of green fondant. Roll out red fondant and cover the 6" cake. Now, time for the fun. I created my own superhero templates by tracing logos from off of the computer, cutting them out and using a sharp knife to cut out individual shapes and stick them together. The two blue shades were dedicated to Captain America and Superman. The black was for Batman and the yellow for Ironman. The red tier was fairly simple. Just roll out thin strands of black fondant, pick your center and starting from there, lay your stripes across the cake from the front to the back. Lay shorter horizontal stripes in between each of the verticle stripes and allow them to bend a little to make a complete spiderweb. Trace out a pair of spidey eyes and your set. 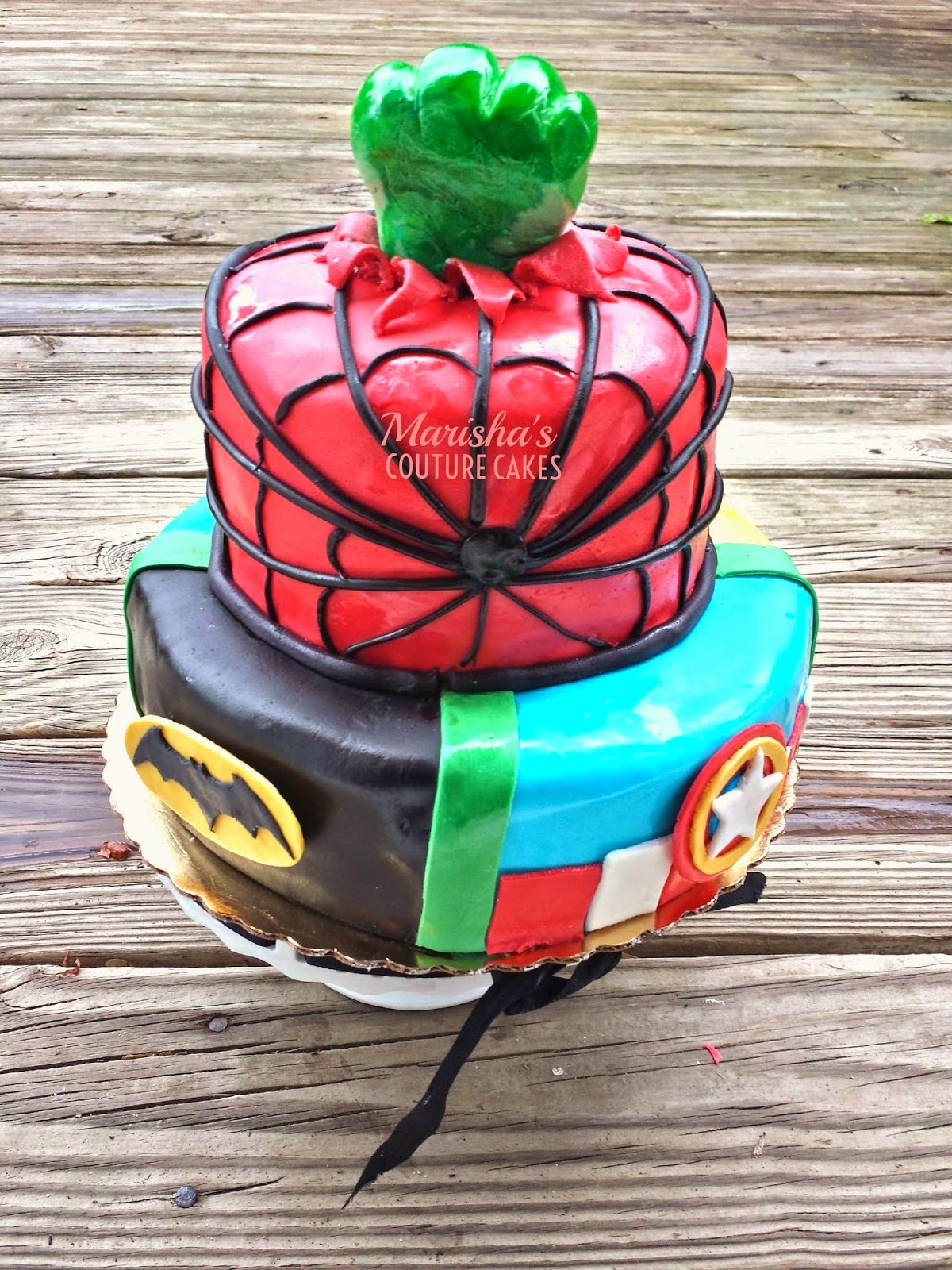 Now....for the Hulk fist. That one took a bit of patience. I attempted the fist twice and it didn't actually come out like a fist until I decided to not think about what I was doing, just do it. Generally you start off with a ball, and use a fondant tool to make the outlines of fingers. This fist is made of fondant but you can use rice krispy treat as the center, then use a toothpick and water to stabilize the fist on top of the cake. Roll out a piece of red fondant and cut out small triangles. Slightly curl the triangles and stick them around the circumference of the hulk fist. Lastly, step back and put on your red cape because you've just completed an Avenger's cake! Woooooo!

I know this can be technical but if you attempt this cake, just have fun. The more positive that you feel, the more positive of an outcome you'll have on the cake. I hope this helps!