Hey food and cake lovers! So, some of you may know that I've been on a low-carb diet aka KETO aka One of the Best Things Ever, for about 8 months now. And not for nothing, I've lost 50 pounds which feels amazing. I've been trying to document bits of my progress on both of my YouTube channels Marisha's Couture Cakes and Marisha Couture with my recipes and updates. 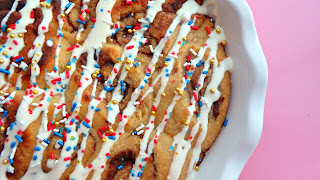 The hardest part about dieting or changing your lifestyle is feeling limited in what you can't eat. After all, you only live once right? With that being said I've been wanting a cinnamon roll ever since I passed one of your favorite dessert spots in the mall last month (starts with 'Cinna' ends with a 'bon'). Granted I've only had them once but boy was it good. I love a good cinnamon swirl dessert, it can be in the form of a cinnamon pecan twirl, a cinnamon swirl coffee cake, I'll even take cinnamon milk on a struggle day. 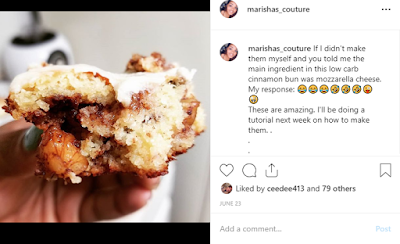 After all of my searching, tweaking, and tasting - I have come to you with a soft, moist, delicious, and fulfilling Cinnamon Roll! I shared a short video of me making this the first time on my Instagram and the video soared. You all were definitely interested in the recipe. So, seeing as how the 4th of July is tomorrow, I figured why not add a little patriotism to this dessert which I would definitely consider to be an American favorite. This video tutorial is below. Make it, tweak it to your taste and ENJOY!